I was alone in a hotel room in Wisconsin when the news of the election started rolling in. Before long I found I was shaking all over. My body started to register that feeling where you think you might piss, shit, and puke all at the same time, and yet you do none of those things. It’s the feeling that you need to escape, escape as fast as you can, that your body better evacuate everything it’s holding so you can go faster, get away, bolt, disappear, but no, no wait, there’s nowhere to go, you’re trapped. Stuck. Froze, frozen, freezing.

And that’s when I realized that I see this election through the lens of trauma. Because we have a perpetrator headed for the highest office of our country, and nothing, neither our bodies, nor our land and water, nor our systems of governance are safe.

What have they done?

Who are they? And what have they done?

Or, perhaps a better question, one I feel called to speak to in this letter to you, is, who are you? And what will you do? Who are we?

Lemme hold you in my mind and meditate on you for a moment. You are my young women, my bright stars. You are almost a generation younger than me, and I can see that you look to me, as a woman who somehow manages to live by her craft, and to let her voice be heard. And I know you’re scared like I am.

Whether you are a mother or not, and whether you ever will be, you hold the spirit of the great and universal mother. That means you hold the spirit of a fiercely compassionate woman who does not tolerate suffering. She does not tolerate the suffering of her children, nor suffering in the world around her. She holds the most interesting paradox, because from a reservoir of infinite kindness and understanding, she produces the most uncompromising of actions.

She is the momma bear who stands up and fucking slays anyone and anything who would threaten her cubs, or the safety of where they sleep. She is the nursing one, who succors the hungry child of another, because she doesn’t care who’s baby this is, mercy is her only true name. And she’s your mother, the day she stood up to that creepy son of a bitch who was testing your boundaries, looking for a way to exploit you when you were too young to understand or to defend yourself. You remember that? Go mamma, you didn’t take no shit did you?  Mercy is your true name, and yet, the whole of the animal kingdom also knows that when the chips are down, you are the one not to be backed into a corner. You are the most dangerous one of all.

On November 9th we woke up to a new era that asked new things of us. Namely, it asked us to locate the mother bear inside each of us, and to allow her look around and decide what she will protect.

What this means to me is that the first thing we have to remember every day as soon we wake up is to value ourselves, and to respect our power. We come from a culture that has convinced us with every single narrative we are fed that we are second class citizens against whom assaults will not only be tolerated but often rewarded. Our ability to recognize and assert our value will be the foundation of our ability to defend what we believe in, and protect what we need to protect. So, if you ask me, the first thing you will need to do every morning is to affirm that you value yourself. And not just as a passing thought, make it a meditation. Sit down with it a while. Visualize it. Surround yourself in this truth as you ready for the day.

Second, you gotta fight the rage. Or rather, let it pass through you. All things are temporary and the paralyzing, inflammatory rage is no different. Anger can be a useful fuel, but it can also eat the marrow straight out of your bones. I find myself struggling every day with a level of disgust and hatred for my fellow americans, for people in my family, people I’ve known since childhood—I think thoughts about them that are so unkind that I struggle to maintain respect for myself for even thinking them. Forgive yourself, forgive yourself, forgive yourself. Let it pass through you. You are better than your worst thought.

And, this brings me to the hottest point of the needle, the place where I spend most of my mental energy struggling day after day. This may be the hardest part, but I believe that ultimately, we are going to have to recognize these people for the suffering that’s leading their actions, to see the perverse twist of their pain, and to have true, total, unwavering compassion for them. Even as we fight them.

I’ve spent the last few years digging deep into myself and learning the path of forgiveness and I thought I knew a thing or two. I was born into a family of heavily heroin-addicted parents, and experienced what you might imagine in terms of the neglect and chaos that ensues when addicts find themselves raising children. When I later learned about the deep if not inseparable connection between trauma and addiction, I also learned that I could forgive my parents for what I’d been through. I could see where they had suffered, and I could put their actions into perspective, and let that understanding open the door for me to see something far more essential about who they are —that indestructible core inside each of them. It’s a profoundly beautiful thing, and one small taste of it made me want more. I wanted to find this essence inside everyone.

A year later I had a similar experience working with people in the prison system in Pennsylvania. I stood before murderers and I saw the true humanity underneath the deed, and again, seeing other human beings naked of blame was impossibly beautiful. And, I started to believe that I understood something about radical forgiveness and compassion.

But—when we mix unconscionable action with systematic power the brew we get is something far more complex and noxious and dangerous. And I’m finding this struggle much much harder.

My parents have both passed away, and while I might not have wanted to meet some of the people I worked with in the prison system in a dark alley during their most dangerous years, no one could argue the idea that any of those folks wield systematic power over my life right now.

But these people. The Trump supporters and his cabinet, the climate change deniers, the racists, the too-long list of people whose misguided, wrong-side-of-history thinking now wields immense systematic power over our lives and our futures? This is another story. This danger is alive, and hot, and burning the ground beneath our feet. Somehow, we are tasked with the challenge of fighting their sickness without becoming sick ourselves.

I once watched the Dalai Lama say that if a Chinese soldier was invading his home, he might kill that soldier—but, that he would not do so with hate in his heart.

I was astonished to hear him say that, but it helped me understand something essential about what it means to have boundaries and compassion at the same time.

You don’t have to be a woman to possess the spirit of the great mother in this way. All you need is to the willingness to embrace the tension and complexity of these opposites. Do not let them make you hate them. Do not let them make you hate yourself. Just know that you will hold space against the predatory sickness that’s ravaging our culture, and that because you are part momma bear, you will do it with loving grace.

I know it’s probably frustrating to be told that you’ll have to suffer, and asked do it with grace while you’re at it. We have to waste endless amounts of energy just getting back to the most basic lessons of democracy and humanity and we don’t even get to hate them for the insult?

But here’s why I say this. I’m rallying for a spirit I don’t touch very often, so in some ways, I’m attempting to speak a language that I don’t really know—but I’ve seen juuuuuust enough, and tasted just enough to know that unlike the dirty, fast-burning fuel of unchecked hatred, the big, big, huge spirit of compassionate momma bear love is infinite. It is radiant, and beautiful. It is a love without end.

I believe it’s the only fuel that will last us long enough to get through this fight, and not destroy ourselves in the process.

Many of us are still in the throes of a kind of PTSD. We know in our bodies how real the danger is. Some days we still alternate between fight flight and freeze. Some days we will grieve. Other days  we’ll hide. Occasionally we’ll have tantrums and rage out at things in spite of ourselves. It’s ok, we’re learning. The future is ours. They know it, and that’s why they’re fighting us so hard.

But me, you, and momma bear, we got this. 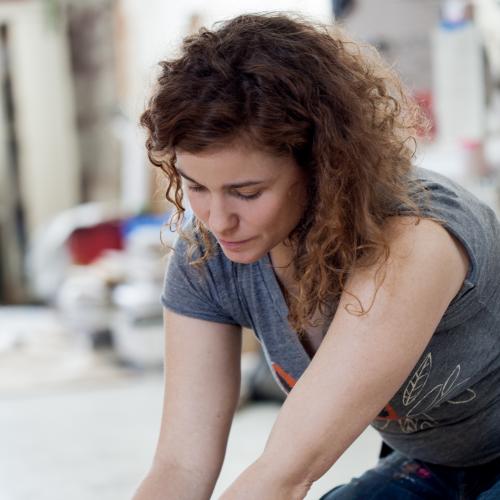 Working under the artist name Swoon, Callie is a classically trained visual artist and printmaker who has spent the last 13 years exploring the relationship between people and their built environment. Her first interventions in the urban landscape took the form of wheat-pasting portraits to the walls of cities around the world, a project that is still evolving. From 2006 to 2009, she constructed and navigated a flotilla of sculptural rafts made from recycled materials down the Mississippi and Hudson rivers, and across the Adriatic Sea to Venice. Since 2008, Callie has been working in collaboration with the collective Transformaziumon a revitalization project in the town of Braddock, Pennsylvania, giving a century-oldchurch new life as an arts center and ceramics guild. In 2010 she cofounded Konbit Shelter and built a community center and two homes in earthquake-devastated Haiti, integrating her creative process into a sustainablereconstruction effort. Callie is currently working toward the construction of a musical house - entitled Dithyrambalina - in New Orleans, collaborating with arts initiative New Orleans Airlift. Alongside her place-based work, she has a studio practice of drawing, printmaking, architectural sculpture and installations. Callie’s work has been collected and shown internationally at galleries and museums, including the Los Angeles Museum of Contemporary Art, the Institute of Contemporary Art Boston, and the Sao Paolo Museum of Art.