My dear strangers—Muslims of the United States of America,

Glad tidings to you. We are a community connected through lived examples of embodying faithful courage, deep humility, and expansive grace in the face of worldly adversity, persecution, and fear. We draw upon the generations of people - our mothers and fathers in belief - who came before us, eager to gain knowledge, and to be of service to God and to His creation. We look to the examples of those who spoke truth to Pharoah, who turned to God alone for strength in the face of labor pains and desperate thirst in the desert, and who witnessed victory against the might of Goliath, liberation from the inside of a jail cell, and freedom from the belly of a fish in the depths of the sea.

Following the examples of Messengers and their allies, families, and companions (peace and mercy be upon them all), and the believers who came before us in the United States, from the earliest slave ships to Bengali Harlem, we must continue to be a community of individuals who speak a good word, and stand with the oppressed and the marginalized - Muslim and non-Muslim - wherever we go.

I know it’s not easy to hold onto genuine fearlessness. I know that anxiety can paralyze and that hopelessness can solidify in the soul. But we tell our truths, the stories of our families of origin - our mothers and fathers in blood and bone from cities and villages and nations across the globe, speaking every language and reflecting each shade of the earth - shaped by the experiment of America. Some were forcefully taken from their homelands, others have voluntarily emigrated, and others have always resided on this continent, but the effects of colonialism, imperialism, slavery, and geo-political aggressions have touched every family. I think of my Bangladeshi grandparents and aunts and father, who have passed on before me, and I wonder about the grand experiment that is the idea of the United States.

We don’t always hear each other’s voices. In the face of the howling narratives of those who think American Muslims are violent and regressive and destructively foreign, we often remain strangers to each other and to people of good conscience and steady spirit in adjoining communities. This is by design. Anti-Muslim hate is about selling fear (the “War on Terror”, and weapons, and the national security state, and so on), and Islamophobia is about the racialization of a faith community. It’s about nativism, and attempts to keep the ethnic communities we also belong in disparate from one another in organizing. I know that I am not interested in assuaging the “fears” of those who relish having the power to destroy me. I know that too many who care for the very idea of my identity and well-being are still strangers to me. I hope and pray that in the upcoming years, those of us who are yet strangers become neighbors to one another in our never- ending quests to speak truths to power, for ourselves, and all those who face unjust violence.

Now is the time to build with the people who love us. Our core principles do not shift in the wind. They stand the test of time, whether we face concerted, insidious attacks from the ruling tribes of the past or the political parties of the present. No matter how hard the path gets, we must continue to shape and fund the way to increased liberation for us all. “Islam began as something strange and will revert to being strange as it began, so give glad tidings to the strangers,” our beloved Messenger (peace be upon him) once stated. Continuing to align with the forces that came before us, and those who gather now in the fights for environment, economic justice, criminal reform, and the elimination of racialized and gender-driven oppressions - among other battles - will not be easy. The daily struggle is not about what happens on the front pages of the newspapers or the Internet. Drawing upon the example of Malcolm X (may God be pleased with him) and others, we see examples of the greater jihad being that of the soul, and a demonstration of having the disciplined strength and acumen to gather and build ourselves, our communities, and our spaces. We see that the greatest opportunity for concentrated work is local, by cultivating the seeds of resilience and resistance and respite in our neighborhoods and cities.

“If the [Day of Judgment] were established upon one of you while he has in his hand a sapling, then let him plant it.” Let us water and attend to our roots as an American community, no matter what happens. Let us pray for safety and wisdom and generosity of spirit in moving forward in this new era. Let us embrace our history as adherents of a faith tradition that works to reduce poverty, free the enslaved, and care for our bodies and our planet, even when times are dire and grief is embedded in our hearts.

Let us speak truth, always, and have the space and strength to discover and empower our best selves with the families we are born into and/or create so that we can be of service for the benefit of all. In looking to our verses and sayings of guidance, to the stories of our ancestors in faith and body, and to all those we have among us here in this time and space: which of the favors of our Lord will we deny?

I know the road ahead will not be easy. I also know that I carry the spirit of revolution in my genes, and that the words of the movement builders - historical and familial and spiritual - must echo in my mind just as they do in many of yours.

I am not alone. 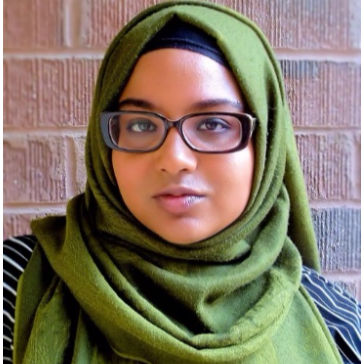 Namira Islam is a lawyer and graphic designer. She is the Co-Founder and Executive Director of the Muslim Anti-Racism Collaborative (MuslimARC), a faith-based human rights education organization focusing on racial justice. Namira has practiced in poverty law, providing legal services to low-income individuals in Flint, MI, and interned in international criminal law for the United Nations in The Hague. Her experience in anti- racism work includes researching the UN Declaration on Human Rights Education and Training. Namira resides in Metro Detroit and is an alumna of the University of Michigan – Ann Arbor and the Michigan State University College of Law.