What a messy, complicated, glorious, tough, lovely thing it is to be Jewish. Family dinners, orthodontia, summer camps, a shared sense of history, destiny, and endurance amidst impossible odds. So much of it’s just swell. Then there’s the other stuff: exile, persecution, pogroms, genocide, the many horrors that are as much a part of our narrative as parting waters, burning bushes, and coats of many colors.

It’s a sad truism among Jews that we must “always have our bags packed,” though I – perhaps foolishly – felt that applied only to our ancestors and Jews living outside the cozy borders of the United States. Now we’re seeing some of the old ugliness on our home turf: white supremacists rebranded as hipsters, spray-painted swastikas on shuls, and a president-elect who seems not only unphased by it but – in his deeply troubling refusal to speak out against it – tacitly, horrifyingly welcoming of it.

The blessedly little anti-Semitism I’ve experienced first-hand has mostly taken the form of thoughtless comments from others. Nothing I can’t weather. But one would have to be a heroic compartmentalizer to not be unnerved by recent reports. When I think, “Oh this is nothing, this will pass,” I wonder how many people might have uttered similar sentiments in Berlin in 1934. An overreaction? Let’s hope so. But if history has taught Jews anything, it’s that under-reaction and/or inaction have often proven foolish and deadly.

I include this quote because there can be a tendency among Jews – logical people that we are – to seek out reasons, causes, explanations. We won’t find any here. Anti-Semitism is a maddeningly unrelenting phenomenon unhooked from any kind of logic. Jews are the canary in the coal mine. When people start hating Jews vocally and vehemently, it means something is off in the collective. People are looking to blame, and Jews – for whatever cockamamie reasons – have long been among the first to be scapegoated. But as Sacks says, anti-Semitism may begin with Jews, but it never ends with them. Others are always swept up in the tide of hate.

The old Chinese curse: May you live in interesting times. Well they seem to be upon us. What to do now? We’re not in what one would call a subtle moment. The behaviors that I find abhorrent – those opposed to my own ethical and moral code – are announcing themselves rather loudly. One need only look to our president-elect for overt displays of pomposity, greed, deceit, divisiveness, willful ignorance, score-settling, bullying, fear-mongering, vindictiveness, one-upsmanship, pettiness, status-obsession (I could go on). Now I could say, “What a horrible person, why is he doing that?” And I have said that on occasion (okay, I say it every day). But the tougher, truer, more useful question to ask is: What am I seeing in this man that I can also locate in myself?

The uncomfortable answer is… everything.

Have I not been gripped by greed, pride, and ignorance? Have I not robbed people of their dignity and individuality in my head by sorting them into ‘groups?’ Have I not had moments where I have been thin-skinned and overly sensitive and struck back with anger and impatience? Of course I have! It’s uncomfortable to observe and admit but, all the world’s ills are in me. That doesn’t mean they’re fully expressed, but it’s ignorant of me to cast others as villains while thinking I’m some sort of virtuous hero.

Given my allergy to so much of the rhetoric and behavior on display, my work as I see it is to bravely confront these same less-than-appealing defects in myself. I can be more patient, compassionate, and forgiving. I can resist the temptation to lump people into groups and rob them of their dignity and individuality. I can listen. I can be of service. I can live a life – day to day – that stands as an antidote to the thoughtless and reactionary behavior that has hijacked the headlines. My life can be an offering of something better.

But the work can’t stop here. No one does anything of consequence in this world alone. I’m going to turn once again to Sacks, as I’m nearing the end of his brilliant book, A Letter In The Scroll (which I heartily recommend) and his words are currently at the front of my skull. The true revolution of Judaism, according to Sacks, was the discovery of a God whose allegiance and sympathy was not with the powerful and mighty but rather with the powerless – the slave and the stranger.

“It is easy to love our neighbor,” writes Sacks. “It is difficult to love the stranger. That is why the Torah commands us only once to love our neighbor, but on thirty-six occasions commands us to love the stranger. A neighbor is one we love because he is like us. A stranger is one we are taught to love precisely because he is not like us… A civilization that does not tolerate difference fails a basic moral requirement of humanity. A world that cannot live with strangers is a world not yet redeemed.”

We were strangers in a strange land. And now the stranger is under assault: immigrants, refugees, the poor, the gay community, Muslims, minorities, women. As Jews – the perennial strangers – we must see this vilification of the stranger as a call to action. I don’t yet know precisely what form this will take. But I do know that lending our voices to and standing in solidarity with the powerless is to be an essential part of the coming years. (If that rumored Muslim registry shows up, for instance, we’re all registering.)

Sack, once more: “Judaism is an ongoing moral revolution that began by challenging the great empires of the ancient world…. For Judaism, then and now, the criterion of a good society is not wealth, power, or prowess but the simple question: does it respect the individual as image of God?”

People often say we need less religion, which may be true. But we certainly need more God. And by this I don’t mean more fealty to some gray-bearded guilt-inducing punisher  in the sky. I don’t mean God as a being, but rather as the supreme source of truth and virtue. ‘More God’ to me means more goodness, more mercy, more compassion, more love, more sacrifice, more forgiveness. When mighty forces are engaged in an attempt to otherize, reduce, and divide, the antidote is respecting the individual as “image of God.”

Let us reanimate our sense of self and other with the light of divinity. May we know that everyone we meet – even those we may fear and loathe – are blessed with the same light of God, however dim and unrecognized it may be. We come from the same divine benevolent source, the same sacred eternal light shines in each human heart. To the naked eye we are strangers. But this is merely illusion. We are commanded to love the stranger because in truth, there is no such thing. 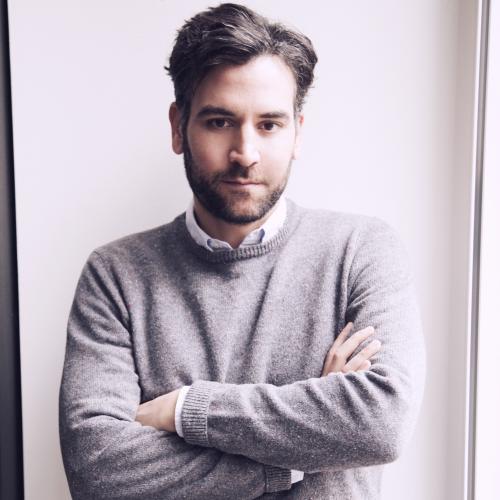 Josh Radnor has written, directed and starred in two feature films, LIBERAL ARTS and HAPPTHANKYOUMOREPLEASE, both of which premiered at the Sundance Film Festival, the latter winning the 2010 Audience Award for Favorite U.S. Drama. He starred on CBS's Emmy-nominated comedy HOW I MET YOUR MOTHER which ended its nine-season run in March 2014 and recently finished filming the second season of the PBS Civil War hospital drama, MERCY STREET, which returns in January of 2017. He was last seen on Broadway in DISGRACED, the Pulitzer Prize-winning play by Ayad Akhtar which received a 2015 Tony nomination for Best Play. And he recently starred in the world premiere of Richard Greenberg’s THE BABYLON LINE at Lincoln Center.