Words for hope are just words. Words are spells. Your spelling is terrible. Drink some water.

Drink. Know the water is rising. The fuels these men use, what fuels these men. It makes the seas rise. The men do not believe in climate change. You cannot own a climate. Change is not the same as progress. The sea creeps closer by 3.2 millimeters every year. It’s a glacial pace.

You ask me for words of hope. Spells don’t work. There are only signs. The sign for change in math is a delta, the mouth of a river is delta; put that glass of water up to your mouth and drink.

Let’s say they win. They won. Let’s say this is what we’ve got, what’s left. Raise your glass.

Scatter our ashes over the ocean.

The ocean likes pounding things to sand, smashes the shore for hourglasses on end. The water’s got time to kill. It will outlast these stupid men and their cruelty. It will rise on the strong dead angry arms of the middle passage and fuck the Titanic.

Which spreads faster, fire or water? You fight fire with fire. What do you fight water with? Nothing. You don't bother. You can't win. The sea level creeps up. Some think the world will end in fire. From what I've tasted of desire. Take a cold shower. Take a bath. Drink up. It only takes two tablespoons of water to drown.

Scatter us under the sea. Watch the hourglass. Watch the sea level. The men now have built a riser on a riser on a riser on every floor to keep it above the water and they keep building but we keep rising, we and the water. They wear hip waders to the office and we elbow each other, safe under the drift. They wear bikinis when they smoke their cigars. Life jackets to bed. Giant squid steal their children and rip them limb from limb. We watch, elated, a little nauseated. We wish the ocean wasn’t quite so violent but oh well. Bubbles rise from the mens’ mouths like balloons released into the sky. We always loved balloons. How they disappear until they become nothing

The ocean has everything now, every forest and factory, every home and hospital. It out-menned the men, took everything. Drink water. Piss it out. Let the ocean move through you. Soon, the ocean will say it’s time to go. The bad blue sea pushes us up, up in a rush towards the surface, we move together, faster and faster, rising giddy. If we can get high enough, we’re gonna kiss the sun. 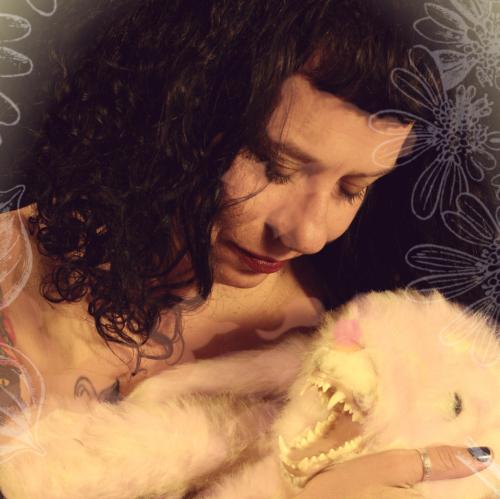 Daphne Gottlieb stitches together the ivory tower and the gutter just using her tongue. She is the award-winning author of 10 books including the new Pretty Much Dead, short stories about the people forced to live outside, hanging on to the edge of the world. Previous works include Dear Dawn: Aileen Wuornos in her Own Words, letters from Death Row by the “first female serial killer”. Daphne is also the author of five books of poetry, editor of two anthologies, and a graphic novel. She is currently finishing a novel about anonymous sex.