To the next generation of activists,

(You may not think of yourself as an activist yet, but a lot’s going to happen in the next four years, so please hear me out.)

The election of Donald Trump as president of the United States was devastating for so many of us. He’d spent months threatening immigrants, women, people of color, Muslims, and the differently abled, among others. This goes against everything I stand for. But within a few days, my initial feelings of despair began to change into something more powerful and productive: the resolve to resist.

I want to share my secret with you because under President Trump, America’s going to need more tireless, thoughtful, vocal activists than ever before, people who are ready to peacefully push back against Trump’s hate-fueled agenda. My secret is that years ago, I made a decision to not become depressed by the companies and leaders that seem set on destroying people’s lives and our planet’s ability to thrive. This is something I actively chose. My most personal, fundamental act of resistance is to wake up every morning ready to make positive change.

Staying positive isn’t easy as Trump nominates his new leadership. In the work that I do for the environment, his slate of nominees reads like a roll call for climate denial, with a large side order of “putting profits before people”:

But if I’ve seen anything, it’s that these nominees have only strengthened the resolve of activists across the country to protect our land, our water, our air, and our climate. Friends and allies who organize against racism, Islamophobia, homophobia, sexism, and more are all seeing the conflicts of interest among these nominees, who are unfit to uphold the inclusive values of our democracy.

Something beautiful is happening in this terrifying political moment. Communities are seeing one another targeted, mocked, and unjustly vilified, and it’s bringing us closer together. Across the historical divides of race, class, gender, and religion, we are recognizing the need to support one another, to be accountable to one another, and to act together in solidarity, whether it’s in the streets, in the halls of power, or in our neighborhoods. None of us should have to accept the bleak future that Trump has outlined for our country when we can offer our own.

It will take many voices to hold Trump’s administration to account. Often, the first step is the hardest: reaching out and finding folks who care about the same issues as you. A great way to connect with like-minded people, and to even start your own local campaign, is through Greenpeace’s Greenwire platform.

There couldn’t be a more important time to skill-up on organizing. Here’s a bunch of free online resources that offer step-by-step intros. Because when they come for one of us, they come for us all. So we will fight for one another.

Together, we are unstoppable. Are you ready? 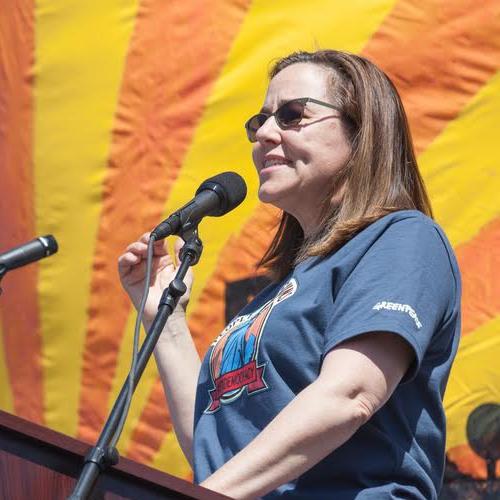 Annie Leonard is the Executive Director of Greenpeace USA. She has over two decades of experience investigating and explaining the environmental and social impacts of our stuff: where it comes from, how it gets to us, and where it goes after we get rid of it. Her film, The Story of Stuff has been viewed over 40 million times and her book of the same name became a 2010 New York Times bestseller. Annie began her career at Greenpeace in 1988 and now leads its U.S. office from the Bay Area, where she lives with her teenage daughter.